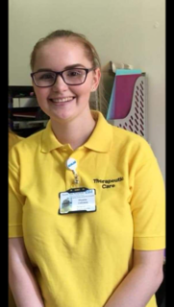 KTS+ received a phone call at the end of September from one of our ex-students Pheobe. She told us she has received her very first pay packet from work. She was so proud she wanted to let us all know.

While Phoebe was at KTS+ she spent 2 years on work placement at James Cook University Hospital on the Children’s Ward entertaining the patients. This then led to Phoebe gaining a place on a Supported Internship at James Cook Hospital, when she left KTS in 2017. Phoebe successfully passed this course and was asked to apply for a full time apprenticeship position on the Children’s Ward as a play and therapy worker. The department could not imagine how they would cope without Phoebe working with them and she was offered the job and started in September. At the end of September, she received her first pay and was over the moon. We are very, very proud of her and her achievements!

Students have visits to relevant destinations from Year 12 onwards and we cover a variety of different desinations based on the needs of the student. Visits become part of the transitions process once appropriate provision has been identified.

ESPA (out of area specialist college)